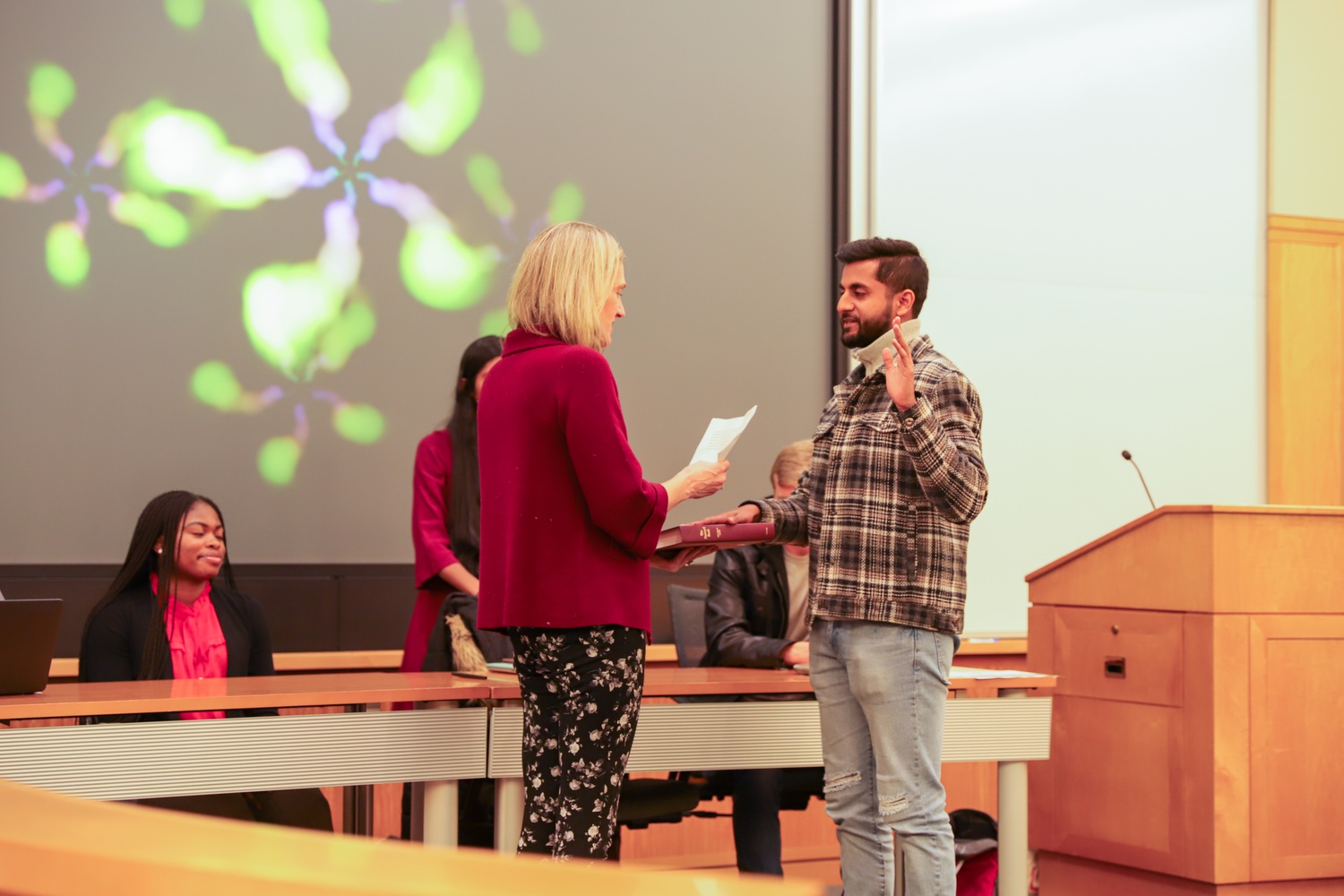 James A. Mathew ’21 and Ifeoma “Ify” E. White-Thorpe ’21 were inaugurated as the new president and vice president of Harvard’s Undergraduate Council Monday night.

Mathew and White-Thorpe won the UC presidential election in November — beating four other candidate teams — after running on a campaign to promote inclusion, wellness, and safety on campus.

Mathew and White-Thorpe swore to “diligently execute” their positions and serve as positive role models and voices for undergraduate students. The pair then took their seats at the front of the room and led the rest of the meeting.

“I’m very, very excited to work with all of you, and we think it’s going to be a good year,” Mathew said to UC members at the meeting.

Both Palaniappan and Huesa said during their speeches that the Council needs to improve its image among students. Huesa said that some students still see the UC as a joke and urged UC members to take their work more seriously so the Council can be taken more seriously.

This year, Aditya A. Dhar ’21 and Andrew W. Liang ’21 — a Crimson business associate — ran for the UC presidency and vice presidency on a platform to abolish the UC and garnered the most first-place votes among students, but lost under the Council’s Borda voting system.

Palaniappan and Huesa both teared up during their respective speeches while thanking each other for their support and friendship.

“There’s no one else I would’ve done this crazy journey with other than you,” Palaniappan said to Huesa.

The room gave Palaniappan and Huesa standing ovations after their speeches, and the duo signed their names in a copy of the “The Harvard Book,” a collection of writings about the University. O’Dair said at the inauguration that she hopes to solidify a tradition of outgoing UC presidents and vice presidents signing their names in the book.

Brennan ran on a platform to improve the Council’s efficiency, as well as its communications with the student body. Harris, who ran unopposed, promised to make the Council’s finances more transparent and to change its grant system software.

Brennan’s election marks the first time in several years that a freshman will serve as secretary of the UC. Last year, the Council elected a freshman — Jack M. Swanson ’22 — as treasurer.

Also during the meeting, Lowell House Representative Rachel L. Reynolds ’22, a Crimson blog editor, presented superlatives to UC members, ranging from “Most Likely to Become a Supreme Court Justice” to “Most Likely to be Quoted in The Crimson.”