Lining Up For “Milkquakes” and $5 Pizza, Hundreds Flock to Milk Bar and &pizza Opening 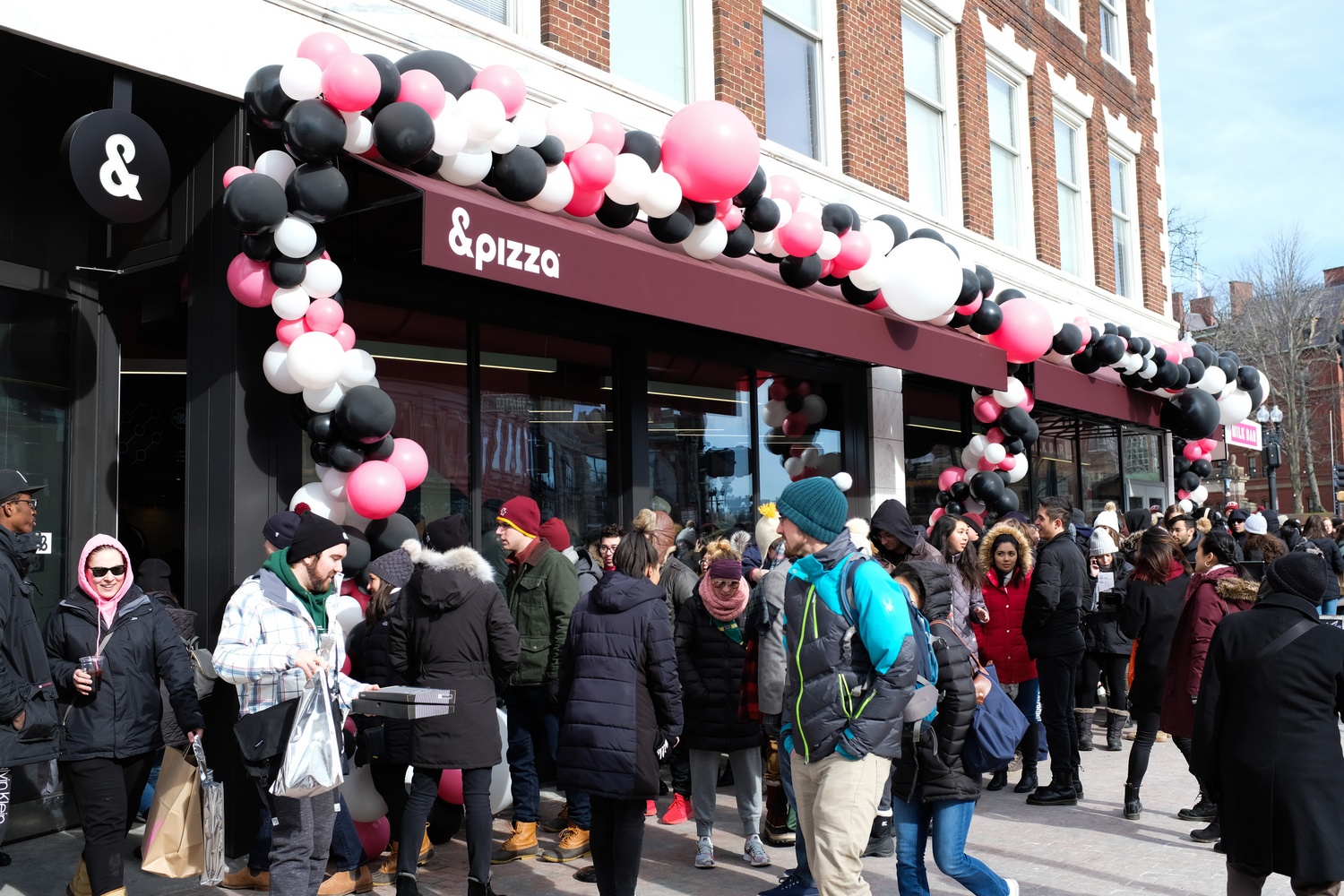 Hundreds lined up for the grand opening of Milk Bar and &pizza on Saturday, some waiting for hours to get in. By Kai R. McNamee
By Ellen M. Burstein and Sydnie M. Cobb, Crimson Staff Writers

A swarm of students, locals, and tourists braved frosty temperatures for $1 soft serve ice cream and $5 pizza at the grand opening of Milk Bar Bakery and &pizza in Harvard Square Saturday. The new combo store sits at 1-3 Brattle St., filling the long-time vacancy left by the departures of Tory Row and Crimson Corner.

By the time the two stores opened their doors Saturday morning, eager patrons had already flocked to Massachusetts Avenue, forming a line so long it snaked down Church Street towards Border Café.

The opening of Milk Bar and &pizza comes after a slew of closings that has changed the landscape of businesses in the Square in recent months. The new store offers patrons both sweet and savory goods from the two popular chains.

Offerings range from Crack Pie — a pastry the menu describes as having “toasted oat crust with a gooey butter filling”— to pizzas drizzled with hot honey. The bakery also serves Boston-themed treats including a Boston cream pie “milkquake” — a milkshake blended with cookies or cakes.

Saturday’s festivities began at 11 a.m., when Milk Bar representatives clad in pink puffy coats distributed hand warmers and encouraged the crowd to dance and join in group cheers. At one point, a pickup truck bearing dozens of cases of Monster Energy drinks parked across the street and began distributing the caffeinated beverages to eager patrons — some of whom had been in line as early as 9 a.m.

&pizza ambassadors, including a number of College students recruited for the positions via email, helped to corral stragglers and make sure the customers who crowded the sidewalk stayed in line.

Some customers said they were drawn to the opening because they are fans of Milk Bar’s founder and CEO, Christina Tosi, a television personality and celebrity chef.

Maegan Cullinan, a student at Emerson College, said she has followed Tosi since the chef’s time on MasterChef.

“I got one of her cookbooks and started baking a bunch of stuff they sell here, so this is really exciting,” she said.

Patrons said they were determined not to miss the opening despite the line.

Milk Bar Chief Operating Officer Sujean S. Lee ’03 said she decided to open the store across the street from her alma mater because she wanted Harvard students to enjoy the bakery’s pastries and ice cream.

“Milk Bar to me is about creating a movement that encourages people to celebrate,” she said.

For those deterred from attending the opening festivities by the prospect of spending time in line on a frigid weekend, Milk Bar and &pizza are open until midnight from Sunday to Wednesday and until 2 a.m. from Thursday to Saturday.