On Harvard Graduate Students Union’s First Birthday, A Look at the Proposals on the Bargaining Table

On the anniversary of the graduate students union election, The Crimson breaks down the list of tentative, ongoing, and yet-to-be discussed issues on the bargaining table.
By James S. Bikales and Ruoqi Zhang 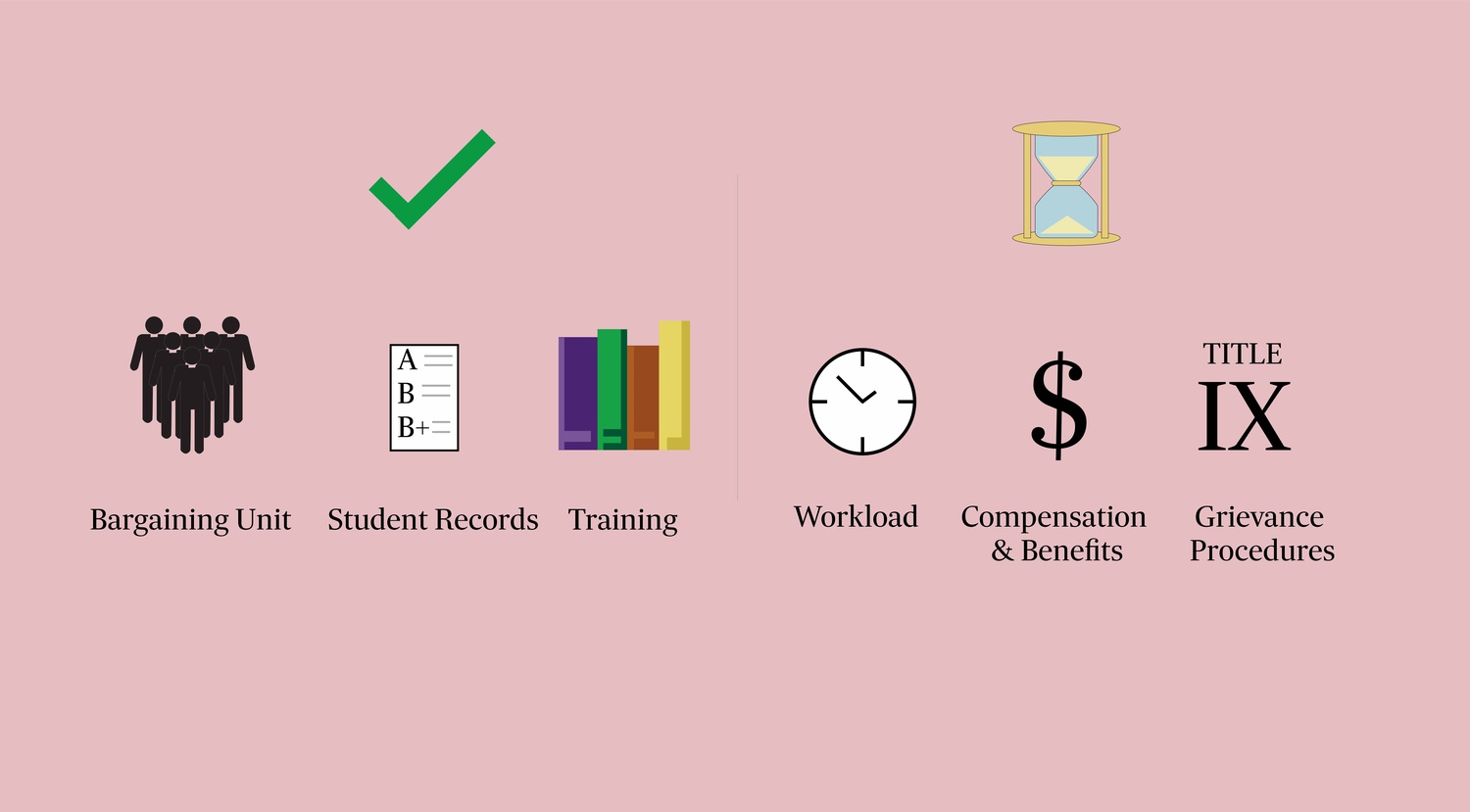 Exactly a year ago, student workers at Harvard headed to the polls to vote on whether to unionize. The process — years in the making — resulted in a win for graduate students and College student workers across the University who supported the cause.

In the twelve months since unionization, student workers elected a bargaining committee, released an 80-item list of bargaining goals, and met 24 times with University negotiators. The two sides have gone back and forth since October 2018 on a number of proposals spanning compensation, discrimination grievance procedures, training, and international student rights.

On the anniversary of the union election, The Crimson has broken down the list of tentative, ongoing, and yet-to-be discussed issues on the bargaining table.

Two issues have dominated contract negotiations in recent weeks — grievance procedures for sexual misconduct and discrimination, and economic proposals including compensation and benefits.

The union’s nondiscrimination and sexual harassment proposal, first presented during a bargaining session in October, has been a central point of contention between HGSU and the University.

The union has proposed that members of its bargaining unit — student workers under the union’s representation — should have the option to pursue third party grievance proceedings in addition to Harvard’s own internal resolution mechanisms. In instances of alleged sexual misconduct, Harvard-based options include filing formal complaints through the Office for Dispute Resolution or seeking informal guidance from the University Title IX Office.

The union’s proposed multi-step grievance procedure would give members of the bargaining unit an option to resolve complaints outside of Harvard if they choose, according to HGSU bargaining committee member Rachel J. Sandalow-Ash ’15.

The union, on the other hand, has argued that arbitration processes leave room for keeping complainants and respondents out of face-to-face confrontations.

“We would ask the arbitrator to keep them separate and arbitrators in these kinds of proceedings do honor those requests to avoid adversarial proceedings,” Sandalow-Ash said.

Swain wrote in an emailed statement that — based on standard practice — cross-examination would be inherent to that “labor arbitration process.”

Sandalow-Ash also said that because investigators in the Office for Dispute Resolution are paid for and accountable to Harvard, they have a conflict of interest in handling these complaints. The union has argued that third-party proceedings could mitigate this concern.

“We find it difficult to accept the view that it is impossible to find unbiased members of the University community who could review an investigation on appeal,” Swain wrote in an emailed statement.

The University’s counterproposal on harassment and discrimination issues would give the union representation on a committee and two working groups to review University’s current policies and procedures on Title IX and “other forms of discrimination and misconduct,” Swain wrote in an earlier statement.

University President Lawrence S. Bacow has also joined the conversation, arguing in an interview last week that a third-party grievance procedure would not be appropriate for sexual harassment complaints because a third-party arbitrator would have no legal authority to discipline anyone outside of HGSU-UAW’s bargaining unit.

Compensation and benefits have also been at the fore during recent bargaining sessions. One month after HGSU put forward its complete set of economic proposals, the University responded with its counter proposals Monday, according to an email University Provost Alan M. Garber ’76 sent to Harvard affiliates Tuesday.

The University’s proposal would raise the University-wide hourly minimum wage to $15, a figure slightly higher than the $14.85 living wage in Boston and Cambridge areas, according to Swain. He also wrote that Harvard’s broader proposal is in line with other contracts negotiated by United Automobile Workers — HGSU’s international parent union — at other universities.

The union, however, characterized the University’s compensation proposal as a “pay decrease” in a bargaining update sent to its members Tuesday. In the update, it wrote that the plan would give a pay raise smaller than that in any three-year period during the last decade, and would “barely” keep up with the cost of living.

The union’s economic proposals would double the University’s expenditures for each graduate student at Harvard, Garber wrote in his email.

Harvard and HGSU have reached a consensus on four contract provisions.

The two first agreed on severability and union recognition at a bargaining session Nov. 9, according to Swain. These establish who is counted in the bargaining unit and protect the contract as a whole in the case that a single provision was ever deemed illegal.

A tentative agreement on employment records made at a Jan. 23 session will allow teaching fellows to view course evaluations written about them, and petition Harvard to remove evaluations that are “horribly inaccurate” or “discriminatory,” according to a video posted on HGSU’s Instagram Jan. 25.

In that video, the union said the two sides also agreed to increase access to professional development resources and training for student workers, and that the University would compensate them for attending training sessions.

Up Next for Negotiators

In a bargaining update from April 1, the union identified five areas — equity and inclusivity, job security and transparency, healthy work environment, international student workers protections, and union recognition and rights — as areas where they have made some progress.

HGSU has repeatedly stated a goal of securing a contract that will take effect this fall.

Swain wrote that the University and the union have set dates for bargaining sessions up to June, but that contract negotiations at other universities have taken anywhere from one year to 18 months.