Jacob Fernandes ‘24 and Bach Nguyen ‘24 stand on the curbside to cross the street after picking up their 2024 Register from 2 Brattle Street Wednesday afternoon. By Andrew Lu
By Emmy M. Cho and Isabella B. Cho, Crimson Staff Writers

The ongoing global pandemic has disrupted every aspect of higher education. Freshmen who lived on Harvard’s campus this fall adapted to daily coronavirus tests and virtual socialization but still said their unprecedented first semester was an overall positive experience.

“Despite the massive concerns over health and the shutdowns and economic crises that are happening, for a lot of students, one of the main concerns that they're having is their inability to truly connect with other people their age,” Fez S. Zafar ’24 said.

For some freshmen, the pandemic exacerbated the daunting experience of adjusting to college life.

As the number of coronavirus cases in the United States skyrocketed in the spring, Harvard, along with colleges and universities nationwide, made the unprecedented decision to send all of its students home in March and conduct classes online.

Over the summer, Harvard administrators determined that undergraduate classes would remain virtual for the upcoming academic year. Some students, including incoming freshmen and a select group of upperclassmen, were invited to return to campus for the fall semester.

The freshmen who chose to come to campus, however, did not attend Opening Days activities upon arrival, as in years past. Instead, they spent days quarantining in their dorm rooms. For the remainder of the semester, all students residing on campus lived under strict public health measures, including severely limited gatherings, packaged meals, closed buildings, and a high-frequency testing regimen.

Despite the myriad restrictions, students still found creative ways to work within safety guidelines and foster meaningful relationships during the new normal.

Finding Friends at a Distance

Like Harvard admits from previous years, many members of the Class of 2024 connected with peers online after receiving their acceptance letters. Many found it difficult, however, to translate these digital friendships to reality.

Abiba I. Dyuti ’24 said quarantine restrictions made her less inclined to reach out to deepen relationships with acquaintances. Instead, she interacted mostly with a group of admitted students she connected with through Discord.

“I do think that I limited myself to the friend group that I had already created virtually, just because it was really hard to make friends in person,” she said. “I think in a normal year — where classes would be in person — I would also make friends through my classes.”

Upperclassmen also struggled, at times, to connect with freshmen. Riley S. Hoffman ’23, a peer advising fellow, said bonding with and informing freshmen about campus life was difficult given that she, too, was dealing with the uncertainty caused by the pandemic.

“At the beginning, a bunch of them were asking me what it’s like living in the Quad. And I told them I don’t know. I got Quadded over Zoom, and I’ve never been to [Pforzheimer House],” she said. “A lot of times it’s hard to give them advice because I’m living through this for the first time too, and a lot of the questions they have, I have as well.”

Still, others found that some students were eager to connect. Hannah A. Bottarel ’24 recalled the first time she and her suitemate explored campus after remaining in quarantine. Several fellow freshmen approached Bottarel and her suitemate as they sat on the steps of Widener Library, enjoying their first days of freedom in Cambridge.

“Five or six different people came up and started conversations with us, which is so nice because I feel like there’s this stereotype that Harvard students are kind of unapproachable and have their cliques and everything,” she said. “But that really wasn’t our experience at all.” 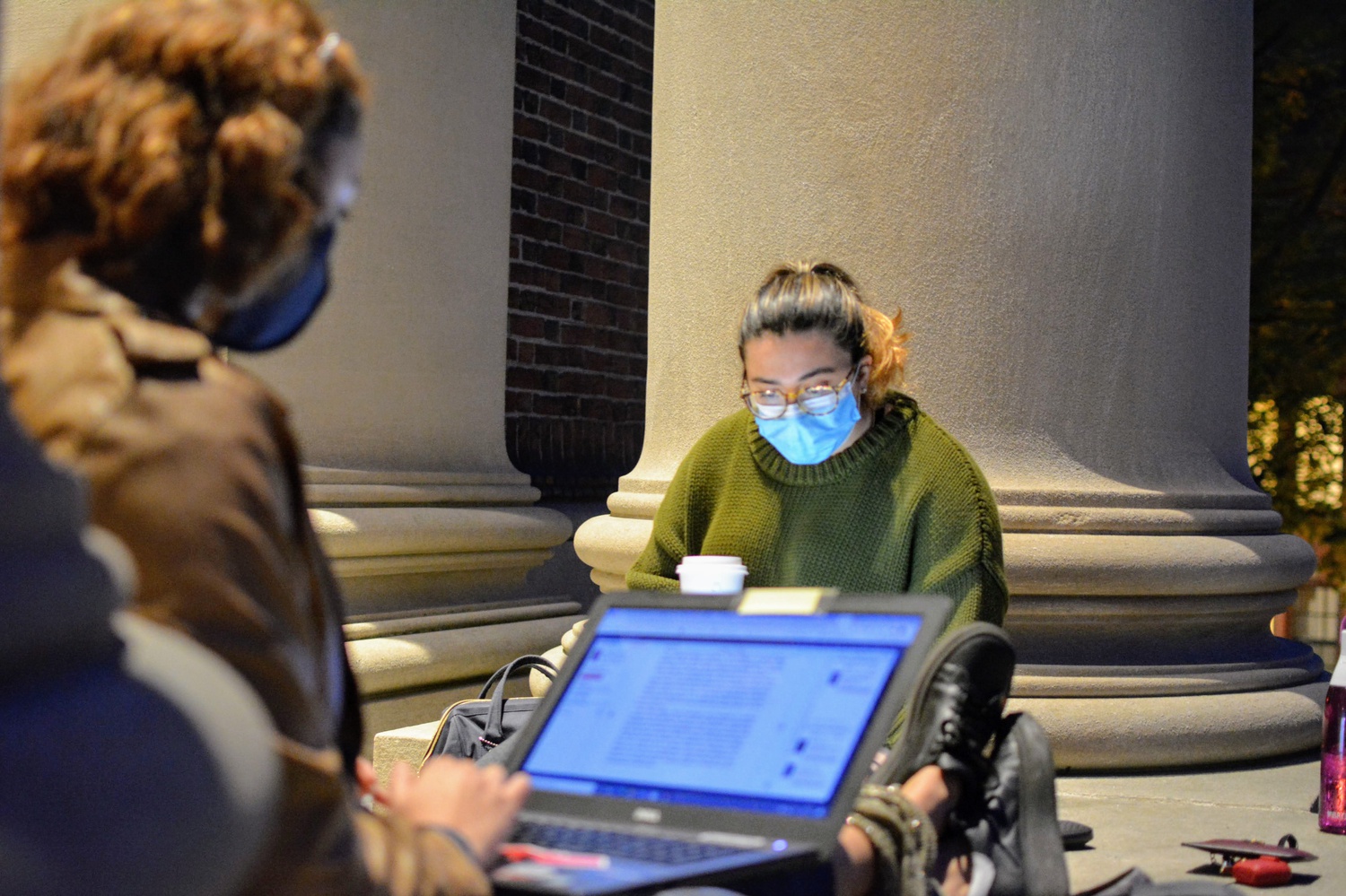 Debbie Perez ‘24 and Tatiana Miranda ‘24 sit on the steps of Widener Library to study during midterm week. Many facilities such as Widener library are closed to student entry at the moment; however, other study spaces such as the Smith Center have slowly begun to open. By Andrew Lu

Eric Yan ’24, a freshman who stayed on campus, said professors and teaching fellows were largely supportive of his academics, but also said he received little guidance at the beginning of the year regarding extracurriculars.

“Academically, I think I was very lucky,” he said. “There were a lot of office hours and ways to get help when you needed help.”

“Extracurricularly, I feel like I was a little bit more confused about what I could be doing and what was out there,” Yan added. “They had the clubs fair, but that was really difficult to navigate.”

Bottarel emphasized that administrators could have done a better job providing students on campus with opportunities to socialize. She said restrictions on entering other residential buildings and study spaces limited those opportunities.

“It would have been, in my opinion, more beneficial for the social atmosphere if they would have made us stay on Harvard’s campus but allowed us to go into each other’s dorms or go to indoor study spaces and socialize there,” she said.

Dyuti also said the dearth of socializing opportunities may have pushed some students to flout restrictions on indoor gatherings.

“I know a lot of people who went to those parties just to feel like they were socializing,” she said. “They just really wanted to make friends because they were really lonely.”

Some students who attended gatherings faced consequences; in one instance, three freshmen were sent home after hosting a party in Mather House.

Peer advising fellows also mentioned the challenges that came with working to engage online “entryways.” Jake E. Schwencke ’21, who became a PAF during his sophomore year, explained how a popular way to “coax” freshmen into conversations — buying them food — fell through due to COVID-19.

“One of the coolest parts about being a PAF is having your little PAF card and being able to coax ‘PAFees’ into meeting with you by buying them Dunkin’ Donuts or lunch in the Square,” he said. “So I think the biggest transition for me has been fostering those relationships without that coaxing method.”

Abby A. Obeng-Marnu ’23, another PAF, also underscored how “Zoom fatigue,” at times, hindered fostering deep relations with freshmen in her entryway.

“Since everyone is super busy, and doing all sorts of things with an extra set of challenges now, it’s harder to even carve out more than 30 minutes to talk to my ‘PAFees’ these days,” she said. “And it really sucks because I know that they’re probably going through a lot.”

Even as Cambridge’s weather grew colder, Dyuti and her friends continued to socialize on the steps of Widener in accordance with social distancing restrictions.

“We would study there together. We would often watch movies there together. And even though it was really cold, everyone would bring extra blankets and jackets just so we don’t freeze to death,” she said.

“I think that was a different experience in and of itself. And it was so much fun,” she added.

Similarly, Aarya A. Kaushik ’24 said that, despite the suboptimal circumstances and strict regulations, she eventually settled into a familiar rhythm and became comfortable with reaching out to peers.

“I don't think I really was able to overcome all the social restrictions but still worked within them, still found friendships, built friendships, and formed meaningful relationships,” she said.

Bottarel also underscored the importance of taking the initiative when interacting with fellow students.

“You never know how you’re going to brighten someone’s day just by starting a conversation,” she said. “So I would say just to not be afraid of making the first move in a friendship, and just being open to anybody being your friend.”

Zafar said that, despite some freshmen living on campus and others living elsewhere, all were ultimately in the same boat this semester.

“We're all kind of worried that everyone else is more connected than we are,” he said. “But the important thing to remember is that all of us are facing this kind of experience. It's not like some people are being socially inhibited by this pandemic and others aren't.”

Despite the mandate that barred international freshmen from residing in Cambridge, Charlie J. Yang ’24, who hails from Australia, found a way to make it work. After being admitted, Yang and a couple of other Australian freshmen connected and ultimately decided to rent an apartment together.

“I’ve been lucky in the sense that I was able to move out with a couple of Harvard freshmen. That’s really helped in simulating that dorm experience,” he said.

Overall, Yang described his semester as “tumultuous but valuable.”

Despite the atypical semester, Zafar is hopeful that, once things return to normal, students will develop the connections they had longed to find during the first semester of their time at Harvard.

“I really think that five, six years from now, we're going to look back, and we'll all still feel like we were able to make those kinds of connections that all of us are looking for in college,” he said.