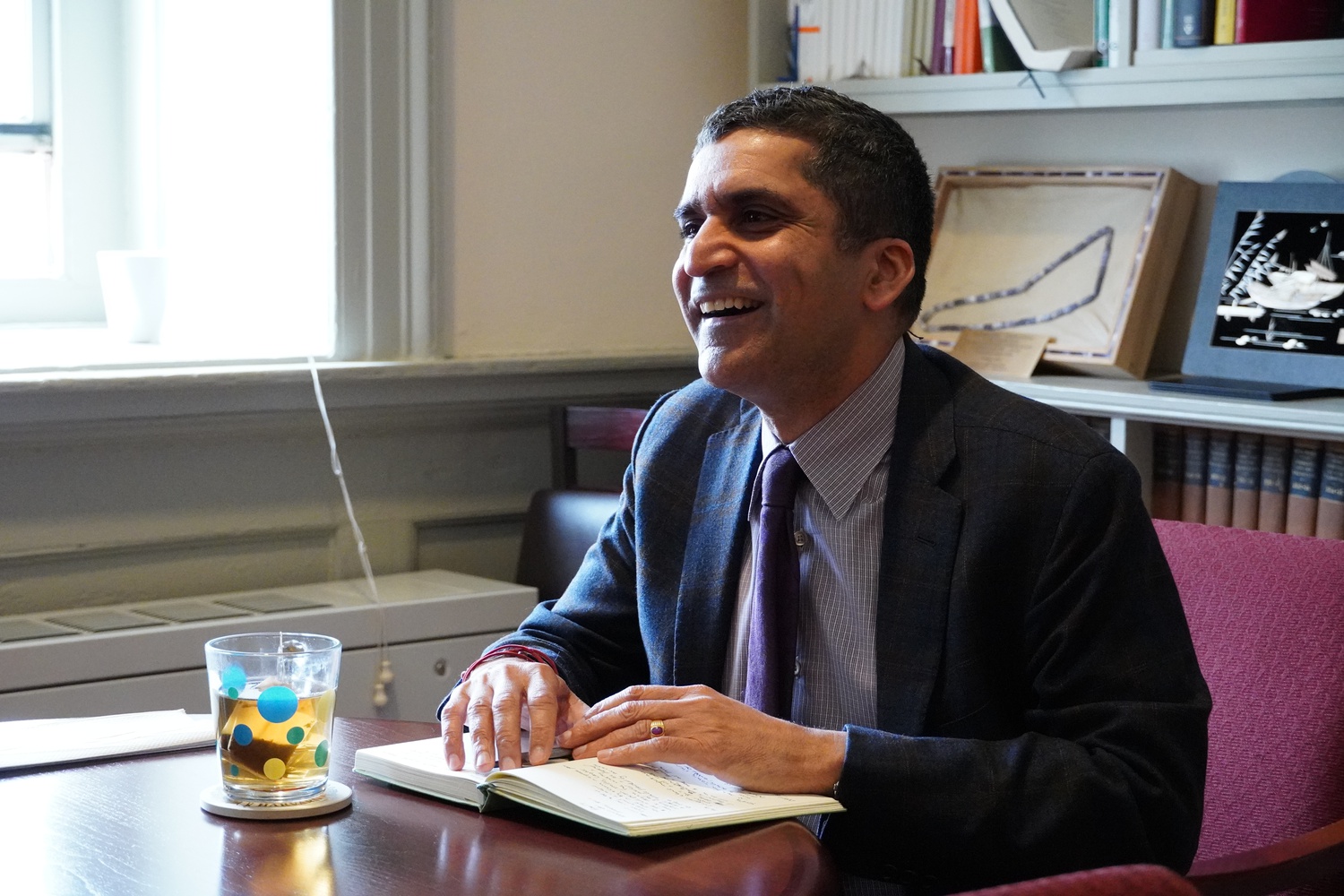 Harvard College Dean Rakesh Khurana, pictured in his office during an interview with the Crimson on Thursday. By Pei Chao Zhuo
By Vivi E. Lu and Leah J. Teichholtz, Crimson Staff Writers

Harvard College Dean Rakesh Khurana called on former members of the Undergraduate Council and proponents of the newly formed Harvard Undergraduate Association to find “common ground” in a Thursday interview.

Earlier this month, undergraduates voted overwhelmingly to disband the 40-year-old UC in favor of the HUA — the brainchild of former UC president Michael Y. Cheng ’22 — in a controversial referendum that saw over 75 percent of students vote in favor of the HUA. Cheng’s tenure was marked by infighting and acrimony that divided members of Harvard’s student government.

When asked about tension among the College’s student representatives, Khurana urged members of both coalitions to find ways to collaborate on shared “aspirations.”

“We all care about having the best Harvard College we can, and we can find common ground on that,” Khurana said. “Building and leading any type of organization with diverse people requires a lot of thoughtful, intentional work in order to make the most of that diversity.”

Khurana emphasized that student government plays a “critical role” at universities by representing the student body. He added that the College will support the HUA in its transition.

“We count on the student government to be an important voice to sharing student perspectives and points of view, to help us reflect and think about policies, about what’s working or can be improved,” he said.

Last month, Harvard lifted its mask mandate, allowing faculty in most classes to adopt a mask-optional policy, which Khurana described as “wonderful.”

“The most important thing I see is how much people are enjoying seeing each other’s faces,” he said. “I always loved the concept of smiling eyes, but I like seeing smiling eyes and smiling faces at the same time.”

Still, Khurana acknowledged the pandemic is ongoing and recognized that some affiliates may continue to mask due to health reasons or personal preference.

“The most important thing I would also emphasize is that whatever people make as their personal decision — mask or no mask — that we respect it,” Khurana said.

Harvard College accepted 3.19 percent of applicants to the Class of 2026 on April 1, marking a record-low acceptance rate as applications to the College reached an all-time high.

“We’re excited about the contributions and who they are, and what they will bring to our campus,” Khurana said. “And we’re excited for what we think we can provide in terms of the wonderful resources Harvard has to strengthen the wishes for the kind of lives they want to lead.”