While Faust’s tenure was imperfect in notable ways, much of what she has done—skillfully adapting to internal and external climates—deserves our applause and gratitude. 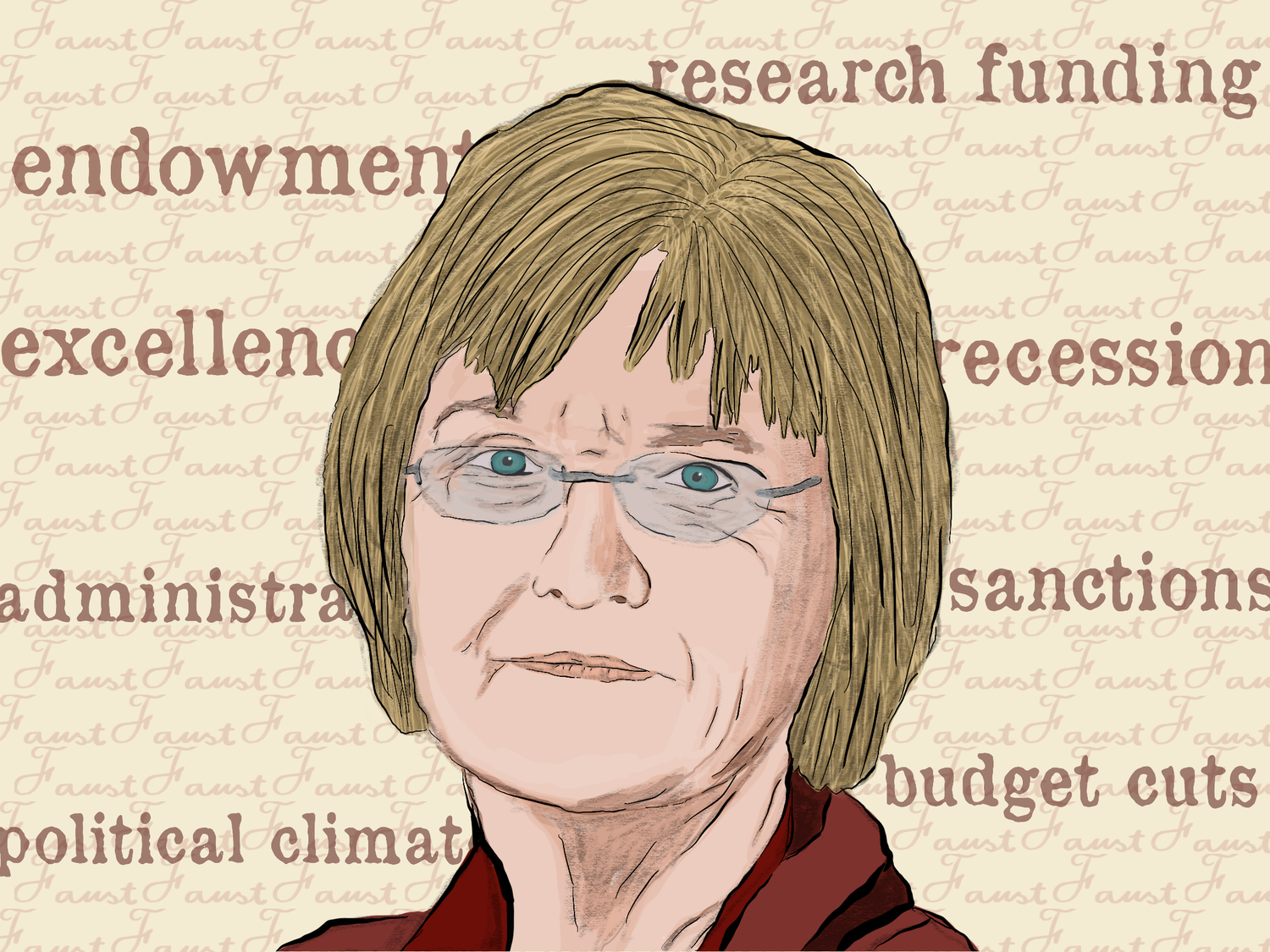 The past eleven years have brought dramatic changes to Harvard, and we have been fortunate to have University President Drew G. Faust at the helm for that time. As the University’s first female president prepares to leave her Massachusetts Hall office at the end of June, we are appreciative of the direction in which she has steered this university during her tenure.

The role of University president has grown to include the titles of fundraiser and lobbyist. This has lead Faust to focus her energies on Harvard’s presence and perception beyond Cambridge. From spearheading diversity initiatives and building a new future across the Charles River, Faust has made decisions—sometimes controversial, but almost always difficult—that will impact the University for decades to come. While we have not always agreed with Faust, Harvard has, by and large, benefited from her judgement, constancy, and restraint.

As she moved into Mass. Hall in 2007, Faust moved forward with many University-wide projects initiated by her predecessor, Lawrence H. Summers, choosing to maintain the status quo. While she may not have begun her tenure by significantly changing the University’s course, her approach to leadership, including its conservative elements, became absolutely essential to keeping Harvard together throughout the following decade.

Just a year into her tenure, the Great Recession struck, taking with it an estimated $11 billion from the endowment within 12 months and threatening the operations of the entire University. Faust and her staff took immediate action to cancel or stop many projects, most notably stopping all construction on the new Allston campus expansion in 2010. While this move particularly upset relations between Harvard and Allston, it was the right decision in retrospect. The stability of the University's finances demanded financial conservatism. Indeed, renewed progress on the Allston campus, which is slated to open in two short years, is a testament to the power that the endowment and changing economic prospects hold over this school. Harvard’s endowment today has recovered to its pre-recession levels.

Faust continued to make the right choices for Harvard’s finances after the recession. The University’s record-setting capital campaign, which concludes in a month, has raised over two billion dollars more than its initial goal.

Despite the success of the capital campaign, however, much attention has also been paid to the endowment’s disappointing returns under her tenure. While we cannot blame Faust wholly for the actions of the Harvard Management Company, which manages the University’s finances, HMC should have been more closely examined and restructured sooner rather than later, as only in the past two years have changes been made. Due to the endowment’s lackluster performance, financial cutbacks from the recession have persisted—for instance, within the College, hot breakfast has still not made a return to the Houses since its removal in 2009. Nonetheless, we appreciate Faust’s efforts in the campaign to convince alumni and other donors to strengthen the University’s financial wellbeing.

As Harvard’s first female president, it is fitting that one of the main tenets of the Faust presidency has been making Harvard a more diverse and inclusive university. Many of her initiatives, such as the expansion of financial aid in 2007, have seen much success. Indeed, financial aid spending has increased by nearly 90 percent since the expansion.

The extent to which Faust has impacted student and faculty diversity is more difficult to assess. The College’s student diversity has increased over the course of her tenure, although, barring her initiatives with respect to financial aid, it is unclear whether Faust herself has influenced admissions to the College. As for the faculty, the diversity of those tenured has been increasing over the years, but the rate of growth remains too slow. We have previously noted that a lack of faculty diversity can cause cultures in certain departments to be unwelcoming to underrepresented groups at Harvard.

In alignment with this concern, the Presidential Task Force on Inclusion and Belonging—a body that Faust herself commissioned—recommended that the University do more to bring in and retain a diverse body of faculty in its March 2018 report. While it is disappointing that more had not been done concerning this issue throughout Faust’s tenure, it is heartening that she allocated $10 million of presidential funds to hiring new faculty in response to the committee’s report.

Still, the most prominent policy initiated under Faust—in the eyes of undergraduates—in her quest to make Harvard more inclusive was the sanctions against members of single-gender social groups. Starting with the Class of 2021, the policy bars members of these organizations from leadership positions in recognized student organizations and sports teams, and prevent them from receiving official College endorsements for prestigious fellowships. The sanctions were first announced by Faust in May 2016. Administrators initially justified the policy as a means to combatting sexual assault and promoting non-discrimination on campus, but it would take almost two years of debate until the Harvard Corporation, of which Faust is a member, stepped in, codifying the policy for the foreseeable future. This step was a necessary one to end such a long and grueling debate on the topic and to ground a new policy that may do real good for Harvard’s social culture.

Nonetheless, many mistakes were made in the process of instituting the policy. Faust and others failed to recognize the difference between male final clubs and sororities by applying blanket sanctions to all unrecognized social organizations. Additionally, finalized implementation mechanisms for the policy were not communicated to the student body in a timely fashion.

Harvard’s now-codified social policy on unrecognized single-gender social groups is ultimately a good one, but Faust could have drastically improved the implementation process. As a result, despite her success in generally creating a more diverse and inclusive Harvard, the rollout of social group sanctions will be remembered as an error, and will remain an unfortunate stain on her presidency.

Faust’s tenure coincided with an increasingly contentious political climate, both in relation to national issues and campus-centered ones. In response, she took on an increasingly important role lobbying political leaders and advocating for higher education. In 2017, the University spent $610,000 on lobbying Congress, $60,000 more than it did the year before. These advocacy efforts were focused on federal research funding, student aid, higher education policies, and endowment taxes.

Faust has led these efforts, expanding her own lobbying as Harvard did. After the 2016 election, Faust described “ramping up” her efforts to protect undocumented immigrants and safeguard science research funding. Some of this has been in response to government actions threatening individuals at Harvard. Faust has publicly supported the DREAM Act, and she has even intervened on behalf of an undocumented student detained at an airport.

Indeed, Faust said this past February that University administrators are doing “everything [they] can possibly think of” to push for legislation securing legal protections for undocumented students and staff. Importantly, she has lobbied both through discussions with lawmakers and through appeals to the general public, for example, appearing on CBS this past September to advocate for a replacement to DACA.

In this vein, Faust has taken on a role as a sort of national spokesperson for academia, penning an op-ed defending federal humanities funding and advocating against a GOP tax plan she described as a “blow at the strength of American higher education.” Her lobbying prowess was illustrated during the fight over proposals in the GOP tax plan this past year to implement a tax on university endowments and change the treatment of graduate student tuition waivers. Faust made numerous public appearances advocating against these measures that targeted higher education.

At times, we have expressed our wishes that she had spoken out more—and more forcefully—on certain issues, including that of designating Harvard a sanctuary campus. Yet we remain supportive of her lobbying efforts on behalf of higher education in an increasingly contentious political environment. The University, and indeed the nation, was advantaged by her efforts.

From conservative spending in the face of a recession to increased lobbying in response to political turmoil, Faust has repeatedly crafted her policies in light of external circumstances. In doing so, she treated the Harvard presidency an as administrative position, above all else. A good administrator, however, need not be cautious in their work. As the Great Recession and other constraints have been lifted, Faust has rightfully broken her conservative streak in favor of more proactive and ambitious leadership.

Any leader of a large institution has certain expectations they must meet. For the president of Harvard, this requires stringent attention to advancing the University’s academics, promoting its finances, and representing the school’s interests on a national scale. Faust has succeeded in doing all of these things.

Exceptional leaders, however, must go beyond their positions and raise their institutions to new and unforeseen levels. In this regard, the University’s president should transcend expectations, establishing policies that look towards long-term growth.

Faust’s policy on social organizations and her advancement of Harvard on an international scale have done just this. The social group policy confronts over a hundred years of final clubs deeply embedding themselves within Harvard, and we applaud her efforts—however flawed—to take such a strong stance against them. In the later part of her tenure, Faust seemed willing to gamble her immediate popularity for the sake of the University’s long-term improvement. We believe this is often the mark of a true leader.

As we ourselves have recognized, Faust has sometimes struggled to implement these more proactive policies, but the mark of a truly phenomenal leader and an astute administrator is taking risks when the circumstances favor it. The Great Recession and the Summers presidency no longer obstruct the University’s daily functions, making the later part of Faust’s tenure the perfect time to consider the school’s longstanding challenges, such as exclusivity.

We urge incoming University President Lawrence S. Bacow to learn from Faust’s presidency. He need not necessarily imitate her early focus on financial conservatism. He should not exactly imitate her later attention to social groups and international growth. Bacow should note, however, that these distinct phases both made sense in light of their contemporary circumstances. Adapting to the campus and global climate is essential to the Harvard presidency.

Good leaders—and good Harvard presidents, specifically—must focus on what is needed in the moment, rather than trying to fit some ideal model of good leadership. To risk one’s own legacy with due constraint in tumultuous times, or with unsettling but beneficial policies in calm periods, makes for a truly great president.

Faust did just this, making her tenure an excellent one.

President Faust, you will be dearly missed.