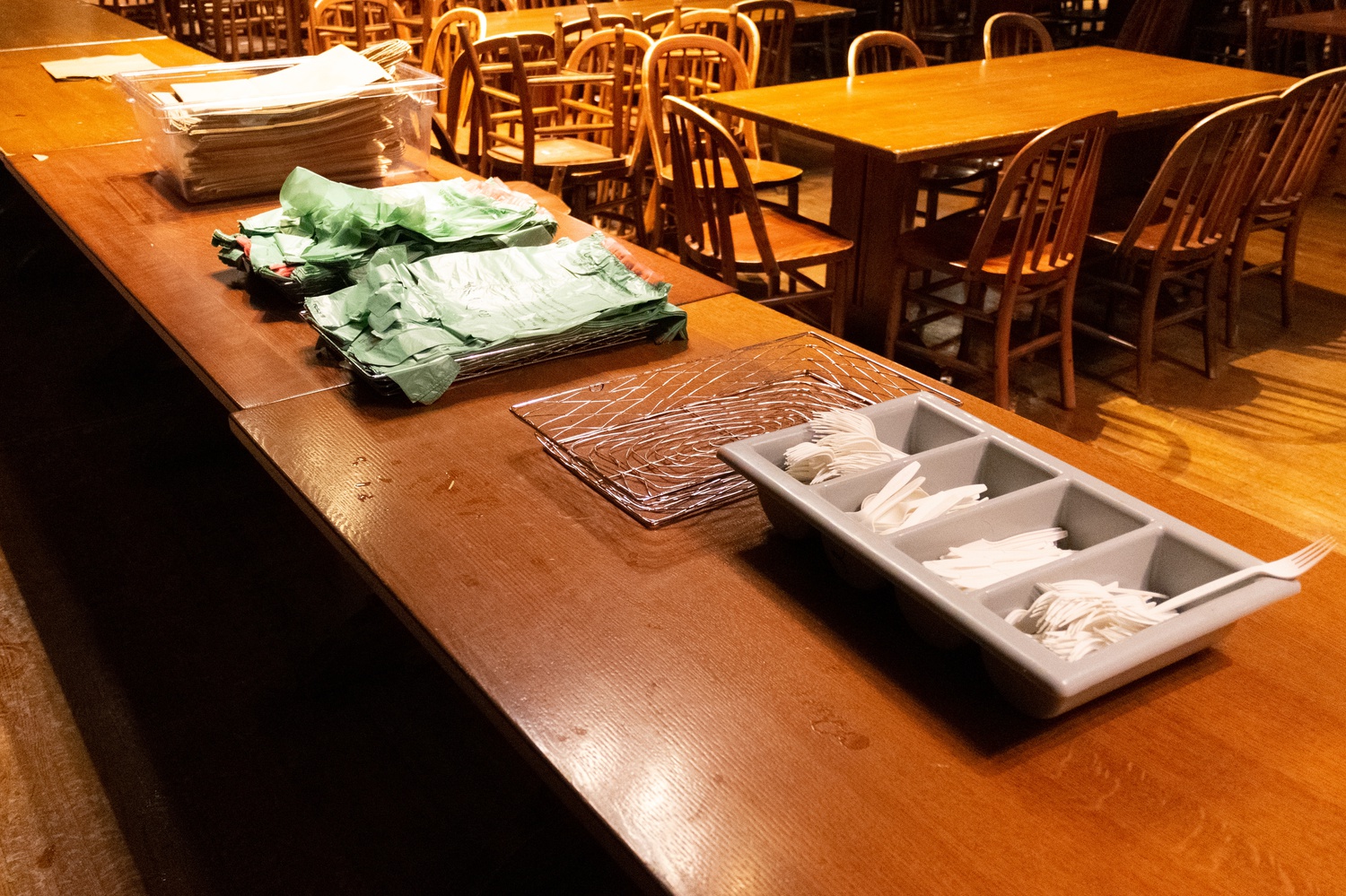 Utensils and bags for grab-and-go dining are found on a table in Annenberg Dining Hall. By Julian J. Giordano
By Christie K. Choi and Carrie Hsu, Crimson Staff Writers

Harvard students raised concerns about the waste produced by grab-and-go meals in the past two weeks, citing the accumulating trash produced by plastic to-go containers.

Dining halls switched to grab-and-go dining for the first two weeks of the semester to avoid high-density indoor gatherings. Grab-and-go meals rely on the use of plastic containers and disposable cutlery, which have been criticized by students.

“I hate it. I’m miserable,” she said. “It’s so bulky, with disasters like me spilling hot, scalding tea over the whole floor because I’m holding things like an idiot.”

Grab-and-go meals have also increased the amount of trash students generate. Administrators in some Houses sent out emails to residents stating that the accumulation of grab-and-go containers in small bins of common spaces has burdened cleaning staff. The emails directed students to drop off their trash at certain disposal sites.

Jeremy J. Rasmussen Jr. ’24 said he considers it “kind of ridiculous” for administrators to task students with managing the extra waste.

“I’ve had to take the trash out about five times this week already,” he said.

Students also acknowledged the sustainability issues brought about by the disposable containers. 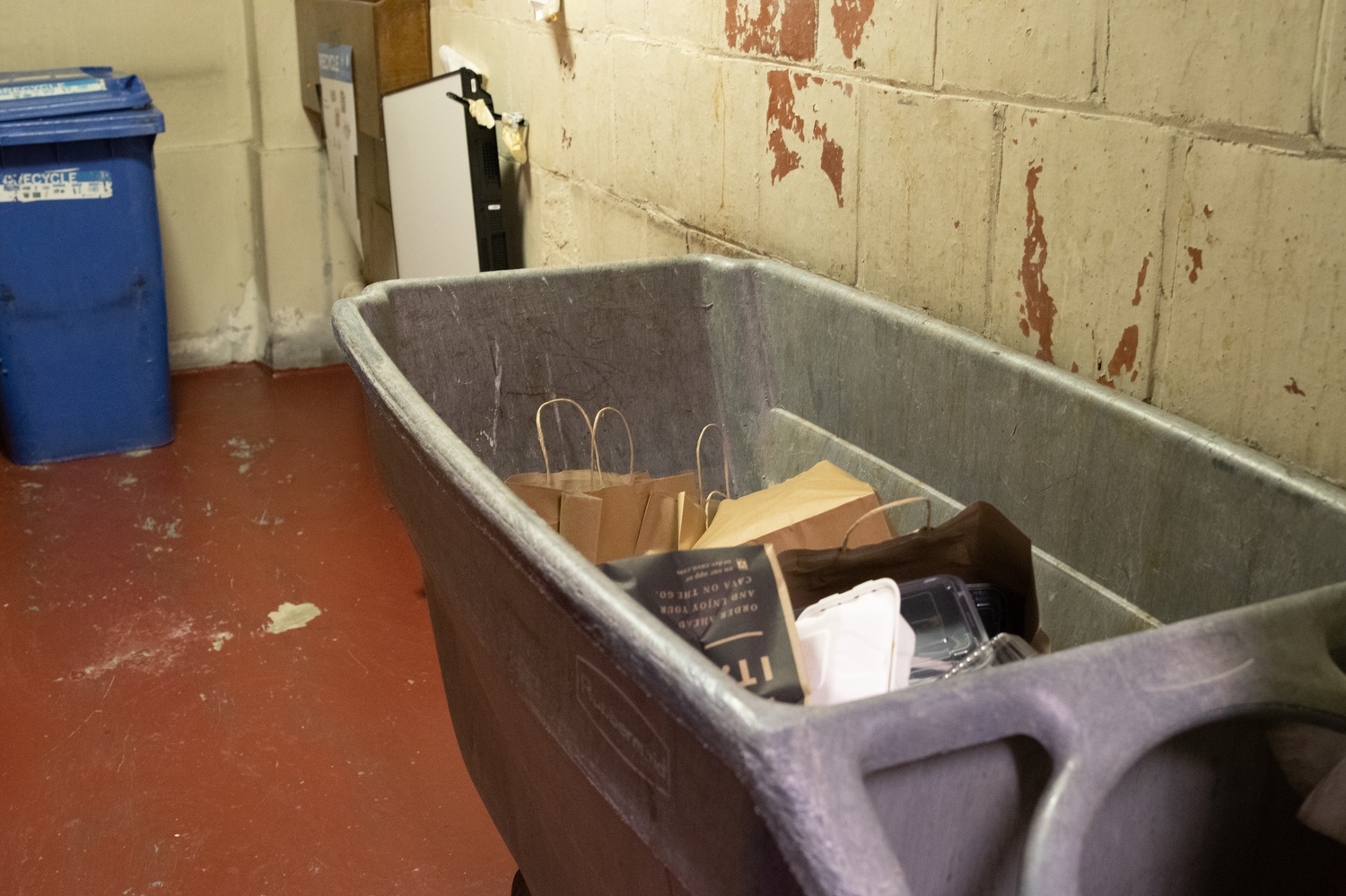 Owen O. Ebose ’25, a representative of the College’s Resource Efficiency Program, said that the University could rededicate the money it spends on grab-and-go dining containers to improve students’ dining experience. He raised concerns about the environmental impacts of using so much plastic daily.

“Plastic is really harmful for the environment, not only because of the toxins released by the plastic itself, but also because of the oil used to produce plastic, which of course contributes to emissions,” Ebose added.

Daniel Shen ’24 said he had brought his own reusable container in the beginning of the semester, but a worker at the dining hall asked him to instead use the disposable containers to avoid “possible contamination.”

“I think they could do better with considering reusable containers,” Shen said.

Sofia Andrade ’23-’24 acknowledged the safety concerns behind the College’s choice to avoid indoor dining for the start of the semester.

“I understand their necessity right now during the pandemic,” she said. “There will be a lot more spread in indoor spaces where people have their masks off.”

But Andrade, a Crimson Arts chair, said the disposable bags offered in each dining hall may also lead to increased food waste.

“I think the school seems to have been encouraging people to take these big brown bags filled with food,” she said. “In the same way that trays make you waste more — like take more food than you’re going to eat — these bags, I think, do the same thing.”

The Harvard chapter of Green2Go — a student initiative that works to mitigate plastic waste on college campuses across the United States — has taken steps to discuss options for reusable containers with students, HUDS, and the Office for Sustainability. The chapter was not founded as a result of the move to grab-and-go dining, but member Isha M. Sangani ’24 said that the “timing does coincide.”

Harvard’s Green2Go chapter aims to implement a “reusable container pilot program,” similar to the existing program at Dartmouth University, at one or two dining halls by the end of February, according to Sangani.

Ebose, another member of the Green2Go chapter, said the program would consist of a token system in which students exchange a token for a reusable container. When they bring the container back, they will get back the token, and HUDS will wash the container.

Green2Go circulated a survey asking students about their knowledge of the disposable containers provided at dining halls this semester. According to Ebose, 36 percent of students who responded were not aware the containers are recyclable or compostable. Of those students who did know, more than half report that they do not regularly recycle or compost.

“One of the core areas of focus in HUDS’ Strategic Vision includes concern for the environmental impact of our programs and services,” Martin wrote. “As such, while we navigate phases of the pandemic, we continue to hold this principle in our planning.”

She added HUDS will “closely monitor student comfort level” for deciding whether to allow reusable containers and will prioritize social distancing measures in dining halls.

“The University’s existing resources for recycling and composting remain in place throughout campus, and we are grateful for the community taking the extra steps needed right now to properly dispose of their waste,” she wrote.

— Staff Writer Christie K. Choi can be reached at christie.choi@thecrimson.com.

— Staff Writer Carrie Hsu can be reached at carrie.hsu@thecrimson.com.